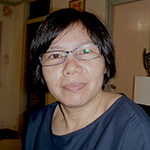 Tran said life in Vietnam was very difficult, she finished high school but could not find work because she did not have money for bribery and did not know someone in the government that could help her get a job.

There were 35 people on her boat, including four small children. The journey took them 1 month. The boat was so old, after two weeks it leaked and almost sunk. Luckily, Chinese fishermen rescued them. The foods they brought were ruined by seawater so they had to beg for food until they reached HK.

Upon arrival, they were placed in Kai Tak detention centre, only then that they knew about the ‘screening policy’.

Tran described life at Kai Tak was hard. There was not enough food and clothes, and there was lack of medical treatments. Tran often got sick, her eyes were infected, she was in constant pain but not until she was transferred to Whitehead detention centre that she received medical treatment, which was nearly a year later. Her eyes were badly affected.

More than a year after Tran arrived in HK, she was screened out because she failed to meet refugee status. She continued to stay in detention centre for another six years.

Tran said that at the Whitehead detention centre there was constant fighting, either among Vietnamese detainees or between the detainees and the authorities to protest forced repatriations.

Tran revealed that the biggest stress fore everyone in the detention centre was the fear of repatriation. Everyone was worried about what the Vietnamese government will do to him or her when they returned. The worst ‘nightmare’ in the detention centre, she said, was listening to the announcement over loud speakers about the government’s intention to return everyone to Vietnam. The announcement was made in Vietnamese and was constantly repeated every few hours. She said it was very damaging to everyone’s moral, people did not feel like doing anything, not even to learn English.

In 1995, after witnessing the horrific incident at section 7, Tran decided to repatriate voluntary. She said, “When I left Vietnam I never thought I would stay in HK this long and I certainly did not ever want to return”.

Several days leading to the incident, camp authorities alerted all detainees in section 7 that they will be transferred to another camp. At the time, there were more than 2,000 VBP at section 7. The detainees assumed that they would be forced to repatriate once they were removed, so they were planning to resist the removal.

When the event took place, Tran stays at section 8, but went to visit a friend at section 7 the night before the ‘transferring’ date. Her friend’s hut was close to the main gate. At about 5 am, she was alerted that there were many policemen inside section 7. She quickly got out and she stood outside the gate to observe the tragedy took place inside the camp from early morning until late in the evening.

Tran said that she could never forget what she had witnessed. The police discharged teargas toward the detainees inside section 7 non-stop, starting from early morning until 5 or 6 pm.
It was chaotic, people were running around in different directions, affected by the teargas, they could not breath, they could not see, people were coughing and crying.
Some detainees climbed on the rooftop to protest and could not get down. As soon as they got down from the roof, they were severely beaten by police with batons. Tran watched one of her friends being beat up so much that he had many broken bones and one his eyes was permanently damaged.

Three months after the incident, Tran returned to Vietnam. She said life in the country was even more unbearable than before she left. Two weeks later, Tran and 14 other people who also returned from HK jumped on a boat and set sailed to HK again. Her family did not know she was leaving and she left before receiving the money that she was supposed to receive from the UNHCR under the volunteer repatriation scheme.

Similarly, the journey took them about a month. This time, Tran said it was different because there was hardly any boat heading to HK as it was the first time she went in 1988.

A year later, Tran’s friend arranged for her to meet with a man from HK, at the detention centre where she stayed. They became friends and later got married and have one daughter. When I met Tran in 2013, her daughter was finishing high school and Tran was working at a local factory.

Reflecting on her experience as refugee in HK, Tran said that she felt neutral about the HK Government. She said, “in general, the government was not very difficult, but as things escalated, they had to take harsh action”. Tran claims the war that caused all the pain and sorrow, “No one wants to leave, and even birds do not want to leave their nest… I am now at peace and I live my life with purpose.” she said.

Tran’s sister, who came to HK with her in 1995, got married and had three children while staying in the detention centre. They volunteered to return to Vietnam, sadly, her husband got depressed and became a drug addict.