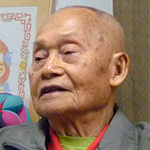 Mr Huynh was born in China 1927, in 1936 he and his family migrated to Vietnam. They settled in Sa Dec, South Vietnam and he was sent to school in Saigon where he learnt languages, including French, Chinese and Vietnamese. In 1948 he was sent to HK to live with his uncle.

Mr Huynh’s involvement with Vietnamese boat people (VBP) started in 1979 and he continued to work at various refugee camps until he retired in 1995. He started working at the Jubilee refugee camp, later was transferred to YMCA and finished at Kai Tak North. His works with VBP included managing the students at the English school at Jubilee, secretary at the newsletter room and food distribution.

At 90, Mr Huynh still remembers many tales from the times he worked with the VBP. He told the story of the VBP who stayed at the camp next door called the HK Christian Services. The two camps were separated by a wall, some of the VBP from the HK Christian Services would sneak into Jubilee for food because they think the food there was better, they also wanted to stay away from the drug problem at their camp. Mr Huynh let them stay for food but made them sweep the ground before they return to their camp.

Mr Huynh recalled an incident at Jubilee before the camp was closed where a Vietnamese refugee stabbed and killed an ethnic Chinese refugee. The perpetrator went to prison and after he was released from jail he as given resettlement in the UK.

Mr Huynh said that there were VBP from North Vietnam bullied other refugees in the camp and demanded money or valuables, but the victims did not dare to report. Because he is Vietnamese, some of the refugees shared these stories with Mr Huynh.

Last week, Mr Huynh was very touched by a former Vietnamese refugee who was liked a daughter to him when she was in the refugee camp in HK. She resettled in the US, got married and on the way to their honeymoon in Japan she and her husband stopped by HK to pay him a visit.