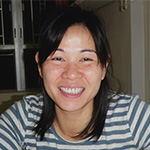 Born in 1973 in Ha Noi, Vietnam. Huong was second youngest among 9 children.

She was 14 when her parents told her she had to leave Vietnam. There was only one space left on the boat, she her parents sent her alone.

Alone and scared, Huong grew attach to a Vietnamese boy (16 years old) and his family, they escaped on the same boat. When arrived in Hong Kong, she stayed with his family in Shum Shui Po camp. Huong was offered resettlement in the US, but as a young girl, lacked of understanding and guidance. Huong thought that if she stayed with her boyfriend, she would be able to go with him and his family to their resettlement country. It turned out that his family was accepted to go to France and she was not. By that time, she also lost her chance to go to America.

Two years later her boyfriend was addicted to drug, so his family left him behind with Huong and went to France. As soon as Huong turned 16 she began to work in factories, he boyfriend took almost all the money she earned to buy drugs. She constantly beat her up and no one in the camp would protect her.

At 17, she was pregnant, her boyfriend continued to abuse her. She gave birth prematurely, the baby was in intensive care for one month. Her boyfriend never once visited her and their child.

Couldn’t take any more physical abusiveness, Huong requested to move out (to another section within the camp). Her boyfriend stabbed her, n the face. He was taken to jail for a short while then was released back the same camp, which was Pillar Point.

Huong immediately moved in with another young Vietnamese refugee because she needed protections (it’s very dangerous for female to live alone in the camp). He was also a drug user. Because she was in so much pain from the stab wound, her new boyfriend gave her some drug to help her sleep. Unfortunately, Huong became addicted. Her boyfriend supported her addiction until he was caught dealing drugs and was sent to jail. Huong then moved in with another new boyfriend, who was also a drug addict. He too was caught and was sent to prison. This time Huong was alone. To support her addiction, Huong worked for drug dealers; she picked up drugs in town (they usually secretly met in public toilet), she hid them in groceries bags and brought them back to camp, processed, packed them in smaller portions and sold them, Huong would then received some small share of the drugs from the dealer for her own need. After a while, afraid of betting caught, Huong quit dealing and resourced to stealing to support her addition. One day she was caught and received a warning from police.

Huong demonstrates how she smuggled items

Huong stopped dealing and stealing but still addicted to drugs. She nearly killed herself by injecting chemicals into her body.

In 1994, James Ginns took over the management of the camp and he helped to send Huong to drug re-habitation at a local church. While she was there, James took her little girl (her name was Cam Anh) to school and brought her back to the church everyday.

Eventually, Huong stayed off drugs, she met a young Hong Kong man who was also there for drug re-habitation himself. A year later, they got married and had two children.

Cam Anh is now 23, recently graduated from college. She is currently working and helping her parents.

Huong and her husband are still working at the same church to assist other drug users. Yearly, they raise funds to assist orphanages in Vietnam.