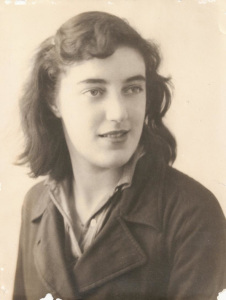 Cynthia was born on 24 September 1924 on the Wirral in the North of England; there were five children in her family. At the outbreak of Hitler’s War in September 1939, Cynthia was to be 15 years of age. Hitler’s planned invasion of England did not take place due to the Battle of Britain, which appeared to have a deterrent effect! However, daylight Luftwaffe bombings were replaced by night attacks, so Cynthia and others were kept busy round the clock.
Cynthia’s interest in horticulture was insatiable. At age 16 she worked on the Estate of The Earl of Iveagh (‘boss’ of the Guinness Empire). With glowing references from the Earl she went to the Royal Horticultural Society’s Gardens at Wisley. That was where she met her future husband, Talbot. Then Cynthia secured a prestigious post at The Royal Botanic Gardens, Kew.

After over a year at Kew Gardens, Cynthia Joined the WRNS (Women’s Royal Naval Service) in 1946where she became an Air Mechanic. Upon leaving the army, Cynthia left the WRNS on Marriage in December 1948.

After they had two children, Cynthia’s husband accepted an overseas post, so they set sail to Hong Kong on 26 June 1953, the boat journey took them 1 month and 1 day.

Soon after they settled, Cynthia started to work for the Urban Services Department, and then was employed at Government House. This went on, and she served under three Governors of Hong Kong, Sir Alexander Grantham, Sir Robert Black and Sir David Trench. One of the many outstanding achievements was her being responsible for the Floral Decorations for the newly opened Queen Elizabeth Hospital in Kowloon.

With children growing up and going overseas for education, Cynthia again demonstrated her flair and ability. She became Interior Decorator of the 5 star Mandarin International Hotel in Hong Kong, then the Hyatt Hotel in Kowloon. On the way, she had passed two Certificates in Colloquial Cantonese ‘The Lingua Franca’ of Hong Kong and South China.
Cynthia then joined the vast conglomerate of the Hong Kong and Shanghai Banking Corporation. There, in no time she was promoted to Administrative Officer and put in charge of all the Housing. This was a tremendous undertaking and involved ‘up keep’ of accommodation, leasing, tenancies, and a myriad of human problems!

Cynthia’s last task was also quite incredible and an illustration of the flair and general ability she had in abundance. This final ‘task’ undertaken with her usual skill and ability was during one of Hong Kong’s most challenging episodes; being the deluge of Vietnamese Refugees into Hong Kong’s territory from 1979 onwards. Cynthia kept a record of the Vietnamese onrush as it happened. She kept a complete ‘dossier’ (newspaper clippings, photographs, and all manner of information sheets) of events as the drama unfolded.

With her orderly mind and flair for research her efforts in this field has resulted in perhaps the most comprehensive record in existence. It included not only the Hong Kong experience, but that of Malaysia and neighbouring territories as well. Some of the newspaper reports were to say the least graphic, but they were all there in her carefully assembled albums of history. Having a great interest in Philately as mentioned this stood her in good stead resulting in an invaluable record of some of Hong Kong’s most humanitarian events.